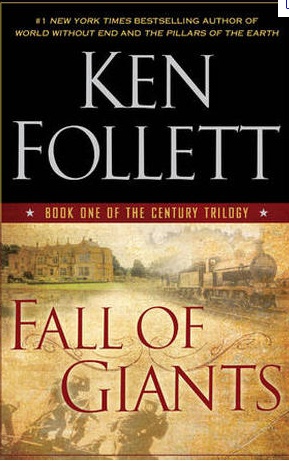 This is an excerpt from an ABC Book Show interview between Jennifer Byrne and best-selling Welsh novelist, Ken Follett. I thought it was a great interview that captured the essence of what makes a successful novel and reflects many of the key principles we apply in our courses at the Writers’ Studio.

In her background briefing of Follett she said, “I think it’s fair to say you went somewhat slowly to the top. Ten books which went nowhere, then the eleventh – Eye Of The Needle, which sold over ten million copies.

Here are some highlights from the interview:

JENNIFER BYRNE: Is there a common thread, you think, that puts books, not just yours, but that defines a bestseller, an X factor that you need to get that book to the top?

KEN FOLLETT: I think there is. I think it’s the reader’s emotional engagement with the story. If tears come to your eyes and your heart beats faster and if you become angry about something in the book or worried about what’s going to happen or scared or sad, if all of those things happen, then the book is a success and you enjoy it. And if that doesn’t happen, if your emotions aren’t engaged by the story, then reading the book is a bit of a chore. You might carry on because it’s very clever or it’s well written or the ideas are intriguing perhaps, but nearly always, a successful book is one that engages readers emotionally.

JENNIFER BYRNE: And what people would talk about objectively is the quality of the writing. That’s less important than engaging the reader’s hopes and fears?

KEN FOLLETT: I think it is. I see good writing as a means to an end. For me, it’s a matter of being very clear, first of all. The first requirement is to make your meaning clear. Then, it’s also being vivid so that there are pictures in the reader’s mind of what’s happening. And not just pictures, smells and is it warm or cold and all physical stuff. But I see all this as a means to an end. Now, I know that some people read a book to admire the writing technique. And for me, that’s like going to a concert to admire the violinist’s virtuosity, and not listening to the tune.

JENNIFER BYRNE: Mm. Well, let’s take a practical example of that because, ten, is ‘not good’ too kind for those first novels of yours? Were they worse than not good?

KEN FOLLETT: Well, they were published, so they weren’t completely useless. But they were not successful books, no.

JENNIFER BYRNE: And you said that when you were writing Eye Of The Needle, you knew before the market told you that this book was different? What was the X factor? Was that it? That you’d worked out by then what you needed to do?

JENNIFER BYRNE: Now, at the time it was published, you were earning about £8,000 in a small publishing firm. And the American paperback rights were auctioned for about $800,000. Your life changed immediately. Can you remember what…

KEN FOLLETT: You bet I can!

KEN FOLLETT: I can remember that day! Well, my agent called at about five o’clock, London time. My agent called from New York and said, ‘They’re auctioning the paperback rights today. It’s reached half a million dollars but it isn’t finished yet.’

JENNIFER BYRNE: You thought, ‘Is he joking?’

KEN FOLLETT: No, I didn’t think he was joking ’cause I’d been hoping for this for some years, I’d been working towards this. I went out and bought two bottles of champagne. And invited my neighbours in. My next-door neighbours were a gay couple and my first wife and I were very close to them. So the four of us sat around drinking champagne and waiting for the auction to finish. And then, at about 9:30 in the evening, my agent called again and said, ‘Well, it’s finished, and it’s $850,000.’ And of that, about 60% was mine.

KEN FOLLETT: It was a lot of money, yeah..

JENNIFER BYRNE: Let me put a theory to you I have about bestsellers and bestselling authors, which is that the core difference or the core distinction is the relationship you have with your audience.

KEN FOLLETT: Well, I think all the time about my readers, and I know that not all authors do this. And my friends who are more highbrow writers than I am don’t think as I do about the reader. All the time every page, I think, ‘Will readers like this? Will they believe that this could happen? Will they care?’ And most importantly, ‘Will they want to know what happens next?’ I think about that constantly.

JENNIFER BYRNE: And you were saying you are friends with a lot of more highbrow writers. Do they, and you, do you talk openly and honestly about the different approach?

KEN FOLLETT: No. No. One of my friends is Hanif Kureishi, who’s quite a highbrow writer, and he once said to me, ‘I never think about the readers.’ And I said to him, ‘That’s why you’re a great writer and I’m a rich writer.’ (Laughs)

JENNIFER BYRNE: What about editing? What editor is ever going to say, ‘I think you’re wrong, Mr Follett’?

KEN FOLLETT: What’s useful to me is somebody who says, ‘Well, why did this character say that at that point? Or ‘Wouldn’t it be more sympathetic if this character before he makes this ruthless move if he worried a little bit about what he was doing?’ That kind of thing.

JENNIFER BYRNE: Ken, you got ten chances, well, 11 chances counting Eye Of The Needle, to get it right. Do you ever feel for young authors who are unlikely to get that degree of latitude now?

KEN FOLLETT: Well, what I say to people is that the publishing business is full of young people whose dream is to find a great unknown author and publish him or her.

That is how you make your reputation. Or as an agent. In my agency, there was an assistant called Jodi Reamer and the boss handed her a manuscript one day and said, ‘I don’t think much of this, but tell me what you think.’

“I came back the next day, she said, ‘I think it’s really good. Could I have a go at selling it to a publisher?’
The boss said yes, and that book was Twilight by Stephenie Meyer. And that assistant now earns more than her boss.

KEN FOLLETT: So it does still happen! And if you write something wonderful, then somebody will read it and love it. It’s always been like that. And I think it’s still like that.

Note: All our courses aim to give you tools and techniques designed to enable you to evoke emotion in you writing and draw readers into your fictional world and keep them there.