Home » About Writing » Why Your First Page is Critical 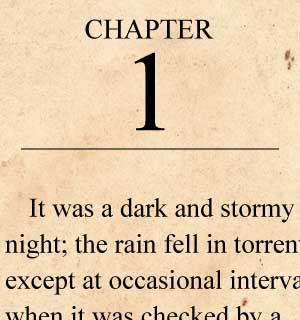 Writing is an art and a craft. If you want to write a novel or screenplay that other people are going to want to read, you have to learn how to craft your story from beginning to end.

In this article we are going to talk about the critical opening of your story.

If you want our readers to read your entire story, you need to make sure your story engages them from the very first line or they won’t keep turning the pages.

Ninety per cent of novels and screenplays are rejected because of poor structure.

The goal of a classic story, according to our methodology at the Writers’ Studio, is to write stories that have readers wanting to know what happens next while taking your main character on an emotional and spiritual journey of change.

It all begins on page one.

And a good agent, publisher or producer will pick up whether your story is doing that very quickly.

Hal Croasmun from Screenwriting U recently wrote about what makes the first page of a script help sell a story. Most of what he says applies to any story whether it’s a novel or screenplay.

Croasman asked twenty five producers, “At what point in a script can you tell if it’s written by a professional screenwriter?”

Many said, “Within the first three pages” but more than half of them said, “On the first page.”

He explains, “By the end of your first page, a producer is already making decisions about your script and your career. I’ve heard too many screenwriters say, ‘My script starts slow, but it really builds by the end.’

“You know what? That script is going to be a hard sell.”

Readers, assistants, editors, creative execs, publishers and producers have a pile of projects to get through. And they want to work their way through that pile as fast as they can.

When they open the first page and begin reading your story, you have roughly thirty seconds to impress them.

Although this may sound intimidating it gives the writer who understands the craft of writing a huge advantage.Writing is a craft that can be learnt.

Before sending your story to readers, you have to pull out all stops and do whatever it takes to make your first page work.

One example Croasmun uses is the opening of American Beauty:

Her mind wanders for a beat.

Want me to kill him for you?

Jane looks at us and sits up.

My name is Lester Burnham. This is my neighborhood.This is my street. This… is my life. I’m forty-two years
old. In less than a year, I’ll be dead.

We’re looking down at a king-sized BED from OVERHEAD:

Of course, I don’t know that yet.

He rolls over, looks up at us and sighs. He doesn’t seem too thrilled at the prospect of a new day.

And in a way, I’m dead already.

To create an opening of that quality requires a sound understanding of story structure which links the character journey to the story events or plot.

It is by having sound structure that you are able to determine the correct place to start.

Here are some concepts to bare in mind to help you draw the reader into your story from the first page:

Remember, your job as a writer is to make the reader turn that page. That is the art and craft of story telling.

Have patience with yourself and invest the time to learn the art and craft of storytelling. This takes time to master and is a rewarding journey in itself that will keep you the writer turning out good pages from beginning to end.