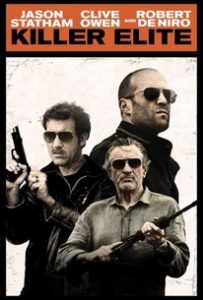 Many people who take our courses are professionals who have always had the itch to do something creative.

Matt Sherring was an advertising executive when he first signed up for Unlocking Creativity.

It was the first creative writing that he’d ever done and he said it gave him the confidence to keep writing.

He started writing his first screenplay at age 40, which turned into his first film, Killer Elite, starring Jason Statham, Clive Owen and Robert De Niro. I recently had a chance to chat with Matt about his creative journey.

How did you make the move from advertising to writing feature films?

The director Gary McKendry is an old friend of mine. We’ve been mates for 23 years. He’s a great talent and an Oscar nominee. Gary was developing the project and he asked me to work on it. I didn’t grow up wanting to be a screenwriter. I was a real estate agent, trainee PE teacher and Port-a-Loo driver before I even got into advertising. But I’d always loved stories, anything from classic novels to Phantom comics, so when Gary asked I decided to give writing a go.

Killer Elite is based on the novel The Feather Men by Sir Ranulph Fiennes – did he collaborate with you on the script?

He’d approve drafts along the way but I didn’t work with him directly. I would have loved to though. The book is controversial. Secret wars. Secret societies. Contract killers and vigilantes. Fiennes is the only one who knows the truth behind it all. It would have been great to interrogate him to find out what really happened. Though, he’s a tough guy, so I doubt he would have confessed too much.

How long did it take you to write the script and how much was it changed from what you originally came up with?

About five years to when the script was sold. Writing before work, after work and on weekends. The script did change a bit, with new scenes during the shoot. Also there were big changes during the edit. Our editor was John Gilbert who cut Lord of The Rings. As a writer it was invaluable watching John and Gary work, cutting a scene to its essence or moving the story forward. You quickly realise how little dialog you need.

A lot of the shoot took place in Melbourne with several Aussie actors including Yvonne Strahovski, Dominic Purcell, Firass Dirani – how did the film come to have such an Australian influence?

The funding for the film came through the Australian studio Omnilab and Film Victoria, so that played a big role. But there’s also so much talent here, on both sides of the camera, so it made sense to use it.

Did you spend much time on set or with the cast members such as Jason Statham, Clive Owen and Robert De Niro?

I spent the entire shoot on set. It was my first film and I wanted to absorb the whole experience, learn as much as I could. Also I wanted to be around to help Gary with any rewrites.

I’d see Jason and Clive on set. Obviously fantastic actors, but also great guys. I met Robert De Niro and had a brief chat. I left the conversation before I got too star struck and said anything embarrassing. Just meeting the legend was good enough for me.

What projects were you working on at The Writers’ Studio?

I did an Unlocking Creativity course years ago. It was the first creative writing I’d done. Roland taught the class. It was a lot of fun, but still rigorous and inspiring. It gave me the confidence to keep on writing.

What writing projects are next for you?

It’s a thriller/action film set in New Orleans. An inter-generational love story with a heist. We’re finalising the script now, and should be shooting in March.

Do you have a particular process or way you like to write? (a time, a place, journal, computer, etc?)

I write on the computer. But if I feel I’m getting stuck I’ll switch to pen and paper, just to shake things up. I’m a big outliner. Big on research. But I have a tendency to procrastinate by over-researching. I’m not a coffee shop writer. I’m way too easily distracted. As I kid I went to a boarding school where we were forced to sit in silence, focus and do our homework. If we didn’t we were caned. For me, that system worked. I may have to try it again. Hire someone to cane me if I don’t get my pages done.

Do you have any advice you can give to other Writers’ Studio participants who are on their own creative journey?

You have to persevere. There were times we doubted the script would ever get finished, let alone bought and made. And you’re never too late to start. I began writing screenplays when I was 40.

As Benjamin Button said “it’s never too late or, in my case, too early to be whoever you want to be.”

This is what Matt said of his experiences doing courses at the Writers’ Studio.

The lesson that has stayed with me is; not to be afraid. Someone who wants to write but hasn’t, can be fearful. Afraid that they have nothing to say. Afraid they don’t have the instinctive skills to write something worth reading.

That was certainly true in my case. But your classes taught me that everyone has a story inside them. You just need to learn the craft of writing in a nurturing environment – like The Writers’ Studio – and your stories can be told. For me, that was an enlightening and liberating lesson.